The right to choose

We support moves that look to increase the sustainability of tobacco growing.

In recent years, there has been considerable debate about the social, environmental and economic impact of tobacco growing, especially in developing countries.

Such calls are based on claims that tobacco growing has worse impacts than other crops. In particular, there are concerns regarding deforestation, the exacerbation of poverty and social inequality through bonded labour and child labour, and occupational health risks such as green tobacco sickness (GTS).

It is true that, like all crops, tobacco has impacts, but our approach to agriculture and working with farmers is designed to mitigate and reduce them.

We agree that governments should look at the impacts of tobacco growing, as with any commercial crop. But we believe this should be done in an inclusive and evidence-based way that takes into consideration the wider agricultural context.

As we actively engage with regulators and governments on this issue, we have developed five core principles which we believe can help guide their future policy decision making. 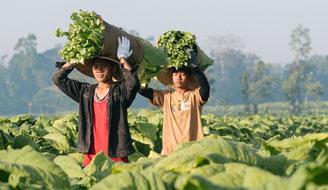 The evidence points to the need to carefully specify and understand context when investigating the role of tobacco cultivation in rural livelihoods and to contrast tobacco growers with non-tobacco growers. Policy makers need to ensure that context is taken into account, avoiding a 'one size fits all' approach." [1]

To help contribute to the evidence base on tobacco growing and to support public policy decision making, we commissioned independent research by Development Delivery International. The 2012 report, 'The role of tobacco growing in rural livelihoods' [1] , comprised a literature review of over 300 published sources, as well as investigations of three contrasting tobacco growing countries: Bangladesh, Brazil and Uganda.

The research concluded that there is no clear evidence to support allegations that tobacco cultivation poses a greater hazard to either the welfare of poor farmers or the environment compared to other available agricultural crops.