At BAT, our people drive our success. They enable us to deliver our strategy and build A Better Tomorrow™ for all our stakeholders.

The BAT ethos sets a clear direction for us to enable a diverse and inclusive workplace culture. We want our employees to feel valued and proud to have a fulfilling career at BAT.

B United, the LGBT+ employee network at BAT, plays a crucial role in reaffirming BAT’s commitment to diversity and inclusion – a central part of that ethos. For example, the network has worked with BAT to develop an allyship guide, which is available company-wide.

As National Inclusion Week is marked in the UK, we catch up with one of B United’s leading lights, Jay Morris.

Jay, a senior technologist based at our R&D hub in Southampton, UK, is B United’s first openly trans member and has been front and centre of B United’s activities during the pandemic. He says he hopes that telling his story will help people who may be struggling to be their authentic selves.

“Being given the opportunity to represent the trans community at a level like this honestly means so much”, Jay said. “I really hope that being myself, being open and vocal about the trans experience can make people feel less alone, because there is always hope!

“It’s easy to underestimate the impact that representation can have.  I know how much it would have meant to me to have people like me that I could look up to when I was growing up. So, I really hope that by putting myself out there that people who haven’t seen themselves represented can see there’s no limit to what you can do! It’s not just empty words – you will be embraced for being your authentic self here at BAT.” 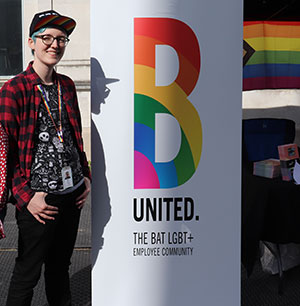 Jay has fully socially transitioned to male since coming out in 2016, and as with the majority of trans people in the UK, remains on the NHS waiting list to begin his medical transition. He says he is grateful for the support he has received since joining BAT in 2017.

“I’ve been incredibly lucky to have joined a company, and a team, that has such a supportive ethos. The vast majority of people have been fully respectful of my pronouns and my gender, and I know my team always has my back. When I emailed B United to join the employee network, I got a reply almost instantly asking me if I wanted to not only be part of the group, but be on the board as well to give much-needed representation to our trans colleagues.”

But while Jay says he has found BAT to be a supportive place, he says that there is still work to do in the UK as a whole in terms of trans acceptance.

“I can’t speak for the LGBT+ issues in other countries, but I would say general understanding and respect of LGBT+ identities is a big struggle in the UK”, Jay added. “It’s usually not that people are being offensive on purpose, they just don’t know what the right way to act or the right thing to say is – for most of their lives, they’ve been raised to believe that straight and cisgender [gender identity matches sex assigned at birth] is the ‘norm’ and very few would have had reason to think otherwise.  If you’re not LGBT+ or close to an LGBT+ person, it’s easy not to even consider these things. But taking the time to educate yourself on LGBT+ identities can really help us feel more included.”

Find out more about B United and other BAT diversity and inclusion initiatives.