Continuing to B United in a pandemic

Despite the impact of COVID-19 on how we all work, our LGBTQ+ employee network continues to play a crucial role in reaffirming our commitment to diversity and inclusion.

2019 was the year that B United at BAT really put itself on the map. Celebrating its first anniversary since rebranding from predecessor Lucky Tribe, B United did some incredible work to raise awareness of its efforts to foster an environment in which lesbian, gay, bi, trans or questioning employees are comfortable being themselves at work.

In the UK, a successful summer party in 2019 at BAT’s London HQ was followed by B United’s first appearance at the London Pride festival. And this momentum was echoed in countries around the world, as B United’s membership rocketed with chapters globally working to ensure BAT remains an inclusive and welcoming place for all employees.

Fast-forward to 2020 and the COVID pandemic and B United has had to adapt. All planned events have been cancelled and face-to-face meetings have moved online. And in a time when people’s mental wellbeing is in heightened focus, B United has a big role to play in making sure its members are continuing to thrive at work – despite the change in circumstances. Despite the current difficulties, B United remains active throughout the world, with chapters busy organising virtual Pride celebrations.

B United president, Damian De Conno, explains: “It’s been a strange time for everyone and at B United we’ve tried to ensure that the network stays in regular contact. The way we work has changed and we’ve lost that ability to physically get together, but we still make sure that our members feel that they still have a safe space where they can talk about anything that’s on their mind.” 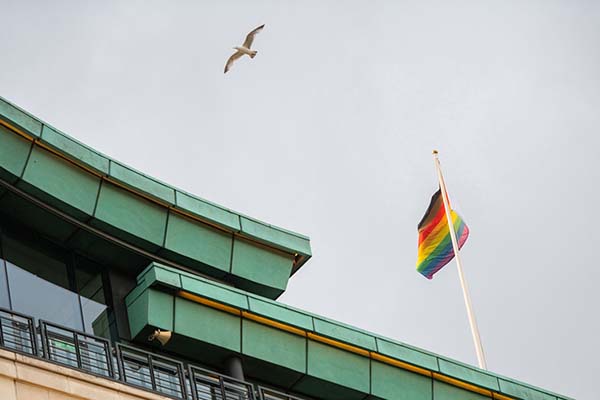 For the second successive year, BAT has shown its commitment to diversity and inclusion with two special additions to our London headquarters. All this week, the front of the Globe House building was illuminated with the colours of the LGBTQ+ rainbow while, on our flagpole, a rainbow flag flies alongside our corporate logo.

Damian highlights what this initiative represents: “We have truly come together as an inclusive and supportive family and I am exceptionally proud of all that we have achieved. Globally, we show our commitment to pride, diversity and inclusion by lighting up the global headquarters rainbow and proudly flying the Pride flag on the rooftop for all to see.

“Our rainbow flag also includes the black and brown stripes to recognise the struggle against racism around the world. We are all in this together, and it’s together that we get through. This is truly ushering in a better tomorrow.”

For more on our diversity and inclusion agenda, click here.