Industry-leading science and innovative Next Generation Products have been showcased in British American Tobacco’s Science and Technology Report 2017/18. 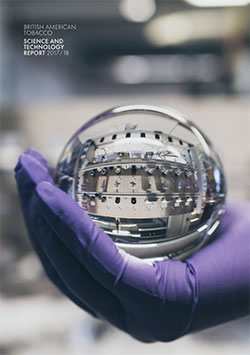 The report — the only one of its kind in the industry — captures the rapid evolution of tobacco science and highlights BAT’s world-class alternatives to smoking. It also reinforces the company’s commitment to providing open and transparent communications around its non-competitive science.

Available on the Apple iBooks Store and from bat-science.com , this report puts the spotlight on BAT’s Next Generation Products, including vapour products such as e-cigarettes, tobacco heating products (THP) and oral tobacco and nicotine products.

A new-to-the-world technology that could revolutionise vaping is showcased in the report, with Austrian inventor Helmut Buchberger discussing the innovative plate-based technology featured in the new Vype iSwitch.

The latest clinical studies, in vitro testing and population studies are also featured in the report, along with articles on Japan’s experience with the THP glo and BAT’s mission to transform tobacco.

Chris Proctor, Chief Scientific Officer, said: “This is our third science and technology report and illustrates great progress in bringing new technologies from concept to consumers, supported by the most advanced science programme we have ever had, demonstrating the harm reduction potential of these new products.”

BAT’s 2015 Science and Technology Report won the ‘Most Impressive Public Service Initiative’ award at the 2016 Global Tobacco and Nicotine Forum (GTNF) conference in Brussels. Building on that success, the latest report has been designed to reach a broader audience, and the eBook features six videos and various animations.