The shadowy nature of this trade makes the scale of it hard to estimate, but we have developed research methods to help our companies and governments to understand it better. These include market surveys, consumer research and analysing packs collected from consumers to estimate the difference between duty-paid shipments and actual consumption.

Cigarettes are among the most commonly traded products on the black market due to high profit margins, relative ease of production and movement and low detection rates and penalties.

For governments too, there is a huge cost. The illegal trade in tobacco products cheats governments out of around US$40 billion each year in taxes. It’s obvious why we see illegal tobacco as a major threat to our business.

Yet some governments are unaware of how bad the problem is and do not acknowledge its link to tax levels.

Legitimate retailers – often small or family businesses – are also damaged as smugglers and criminals steal their trade, while rules for retailers to prevent sales to children are undermined by illegal sales away from the eyes of the authorities.

Fakes can be almost impossible to tell from the real thing. Another problem is ‘look-alike’ cigarettes, where the criminals mimic an original design with some changes. For example, our State Express 555 brand may be copied but the numbers changed to 999. Consumers may think it’s just a new variant.

Counterfeits can also be riskier to health than genuine product. They are likely to contain many times the levels of tar and carbon monoxide found in genuine cigarettes, and in some cases can contain insects and human faeces.

Fakes come from illegal operators all over the world including China, Paraguay, the Middle East and Eastern Europe.

Raids by authorities do take place but many operations are small, highly mobile and difficult to trace in remote areas. The makeshift factories, where cigarettes are usually packed by hand, can vanish within hours and set up elsewhere.

Illicit trade is not just the work of small operators. Organised crime is increasingly dominant. The rewards can be high. Just one shipping container full of trafficked cigarettes could earn a criminal gang more than US$1 million.

Interpol, the international police organisation, says gangs that traffic drugs, arms and people are also behind the illicit cigarette and alcohol trade. The US Department of Justice says some also have ties to terrorist organisations.

What can be done?

We fully support regulators, governments and international organisations such as the World Customs Organization, the World Trade Organization, World Health Organization and European Union in seeking to eliminate all forms of illicit tobacco trade. We would like to see all our markets free of it.

We see it as vitally important that governments establish workable tax regimes and economic policies that do not create conditions that encourage illicit trade, with strong border controls and effective laws to fight the black market. 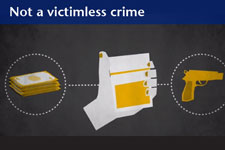 Illegal cigarettes: Who pays the price

This is The Man